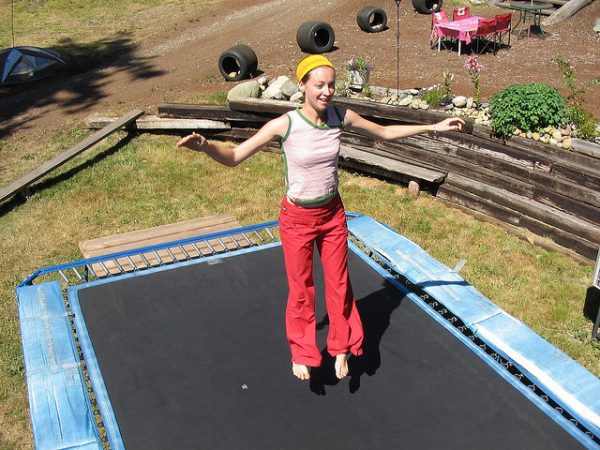 Trampoline Vs Treadmill: The Benefits of Rebounding

The results of trampoline vs. treadmill study were startling to scientists – following are some of the results revealed by a team of scientists from NASA:
1. The G-force measured at the ankle was always more than twice the G-force measured at the back and fore-head while running on a treadmill.
This helps to explain shin splints and knee problems, especially when the natural shock absorbing system of the body becomes so fatigued that it doesn’t do its job correctly, thus throwing added unexpected forces on already tired muscles, ligaments, and tendons, forcing them beyond the point of rupture.

2.  While jumping on a trampoline, the G-.force was almost the same at all three points, (ankle, back, fore-head) and well below the rupture threshold of a normal healthy Individual.
This makes it possible to exercise the entire body knowing that there is no undue pressure applied to any part of the body such as the feet, ankles, and legs, and at the same time knowing that each part of the body is receiving the necessary environmental stresses it needs to become stronger cell by cell.
3. “The external work output at equivalent levels of oxygen uptake was significantly greater while trampolining than running. The greatest difference was about 68%.”
The efficient use of the vertical forces of acceleration and deceleration to produce internal loading by directly opposing the gravitational pull develops more biomechanical work with less energy expended, thus less oxygen used and less demand placed on the heart.
4. While trampolining, as long as the G-force remained below 4-Gs, the ratio of oxygen consumption compared to biomechanical conditioning was sometimes more than twice as efficient as treadmill running.
It is Important to note that although this experiment was performed on a trampoline where the participants were able to develop a G-force as high as 8-G’s, the efficient use of energy was below 4-G’s. People involved in rebound exercise on rebound units have been measured only as high as 3.5-G’s, (United States Air Force, Dr. Ward Dean) so that any activity on a rebound unit is more efficient than treadmill running at any speed.
5. With the G-force the same as or greater than 4-G’s II …there was no significant difference in the oxygen uptake between the two regimens.”
Even when a person is able to develop a force on the trampoline of more than 4- G’s, although it is no more efficient as far as oxygen consumption than running, it is still much better on the lower extremities because all of the cells of the body are still below their rupture threshold providing a safe way to exercise.
6. ” …averting the deconditioning that occurs during the immobilization of bed rest or space flight, due to a lack of gravi-receptor stimulation (in addition to other factors), requires an acceleration profile that can be delivered at a relatively low metabolic cost. .for equivalent metabolic cost, and acceleration profile from jumping will provide greater stimuli to gravi-receptors.”
This statement verifies the fact that rebounding as exercise is excellent for our senior citizens, those physically handicapped, those who are recuperating from an accident or injury, or anyone else who needs exercise but is hampered by a pre-existing physical condition.
N.A.S.A., Journal of Applied Physiology 49(5): 881-887
Photo credit