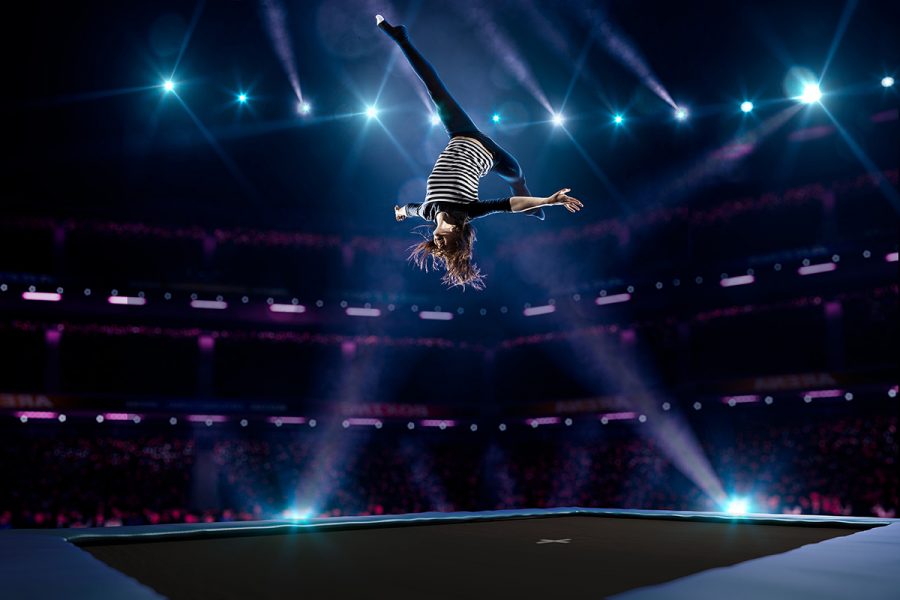 If you think trampolining is just a form of fun exercise, think again. It is a lot of fun, of course, but like all other cool sports out there, trampolining has also become a form of healthy competition. And, once you get right into trampolining, there are all kinds of records that are going to sit there, tantalising, and waiting to be broken.

Have a look at these eight trampolining records. Do you reckon there’s a record-breaking effort in your family? Work up to them through playing these trampoline games!

April 2014 at the Rockefeller Plaza in New York City, 26 year old Sean Kennedy and his brothers Eric (20) and TJ (22) broke their own previous record of the highest team trampoline bounce ever, reaching 6.7 metres high.

That record didn’t last long, though. It’s been broken, by a team of kids, who have managed to reach a bounce height of 6.73 metres.

If you think you can simply jump that high by yourself (for reference; it’s the equivalent of a three story house), you can’t; you need to work as a team, with a couple of people bouncing in rhythm with the central jumper to help propel them higher in the air. The amount of training involved must be intense, but then again, world records shouldn’t be easy to set.

Most jumps on a trampoline grabbing a bar

At the beginning of 2014, Paul Starosciak from Detroit, Michigan, broke the record for most consecutive jumps on a trampoline grabbing a bar.

Starosciak started by jumping high until he grabbed the bar for the first time. From there, he would let himself fall to the trampoline, being sure to always land flat on his back so as to make the impact smoother. He would then bounce as high as five metres, where the bar was located, and grab it again for no less than two seconds. In addition, he needed to hold on to the bar with both his hands and feet.

He finally broke the previous record set, which were 11 consecutive jumps, by bouncing a total of 39 times. Starosciak even managed to keep going even after he hit his head on the bar during one of his attempts to grab it, and encouraged the crowd to keep cheering for him.

On the 12th of March 2012, on the set of Italian show Lo show dei Record, Charles Burrows from the UK broke the record of the highest hole jumped through using a tumbling trampoline. The hole was two metres high.

Burrows started the ordeal by performing a series of front and back slips while running towards the trampoline to gain power. He then bounced and passed through the hole without touching its outside. The measurements of the hole were 80 x 80 centimetres.

The other participant challenging Burrows, Lukas Steiner from Germany, was only able to jump 1.80 metres. Burrows is a gymnast and currently performs in Cirque du Soleil.

Fastest 100m sprint on a trampoline

Trampolines are not just about setting records for height, distance, and tricks while jumping. There’s also a record for the fastest sprint achieved on a trampoline.

Running on a trampoline is a much more difficult proposition than running on solid land. While the flexibility and bounce in a trampoline is excellent for getting a person to be able to launch themselves in the air, that same softness causes problems for running by slowing down each step that a person can take.

A record set on television, the farthest basketball slam dunk from a trampoline was achieved on the Italian version of the Guinness World Records show by Englishman, Jordan Ramos, who achieved an incredibly 10.00m spring off the trampoline to nail a perfect dunk at the end.

This record is definitely Ramos’ own, though as he beat it himself later, with a 10.05m certified attempt later back in his home country.

It’s not the only noteworthy trampoline-and-basketball trick, though. Kerim Daghistani from Hungary also has a Guinness World Record for the biggest forward flip trampoline slam dunk; sacrificing around two metres on Ramos (8.10m) in exchange for throwing a flip into his particular trick.

Most number of people bouncing together at once

Not all trampolining feats need to be athletic in nature, as this record proves. In Singapore in July, 2017, a Guinness World Record was set for the most number of people simultaneously bouncing, with 375 participants all jumping at the same time for five minutes. Each participant brought their own mini-trampoline, and this broke a record that had only been held for a few weeks; 343 participants at an event in London held the previous record from June in the same year.

Most front drops to back drops on a trampoline

An Australian managed to break a trampoline record in his own backyard in Mount Annan, NSW, at the end of 2012. The man, Jordan Lambiris, completed 30 front-to-back drops on a trampoline in 30 seconds. He was also timing it all himself and can be seen in the video holding the chronometer in his hands – all while bouncing!

Finally, something silly to cap off these amazing trampoline feats. In April 2012 in Madrid, Spain, Raul Gomez from Otra Movida’s TV Show, managed to undress himself and put on formal attire – all while bouncing on a trampoline.

Gomez was dressed in a t-shirt and jeans when the clock started ticking and he started jumping. First, he took off his t-shirt and put on his formal shirt. Immediately afterwards, he puts on the tie and then begins to take off his jeans. The hardest part happens when he has to put on his formal pants – we’re still unsure how he did that – but he ends up pulling it off in 45.03 seconds.

Of course, you need to take all necessary safety precautions when you’re looking to break a trampoline world record, and you shouldn’t be attempting such things without years of practice beforehand. But, as you can see, with a bit of imagination, creativity, and hard work, you can do some truly spectacular things with a trampoline, and all the while it is incredibly good for your body and mind.