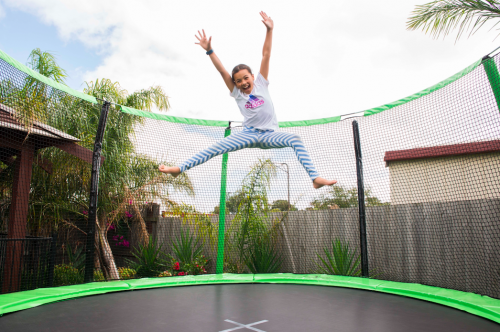 Trampolines have come a fair way since their inception. Generations of children have enjoyed the unique functions and fun they have to offer, however there is far more to these bouncing machines than you may know. Here are 10 interesting facts about trampolines that you may like to know.

1. When was the trampoline invented?

Way back in 1936 Larry Griswold and George Nissen got together and created the trampoline as we know it today. Inspired by trapeze artists and the safety nets they used in their death-defying feats, Griswold and Nissen wanted to bring the fun of bouncing through the air to the masses. Like all great inventors they started in the garage. As a teenage gymnast, Nissen was able to test out the prototype. Made from scrap steel and tyre inner tubes, he eventually toured with the ‘bouncing rig’ as part of his act in the Iowa Hawkeye Circus. After a successful tour, the two men formed a company and began to mass manufacture the product.

2. Where does the trampoline get its name from?

Nissen not only invented the trampoline, he also named it, taking the name from a pseudonym he acquired while performing in Mexico. ‘Campeon de Trampolin’. The Spanish word ‘trampolin’ means ‘diving board’.

3. Is trampolining an Olympic sport?

Yes! Trampolining popularity over the past century has seen it rise to prominence as both a competitive sport and, since Sydney 2000, an Olympic sport. Currently there are two events, men’s and women’s individual. Competitors are judged on their height and the tricks and turns they perform. Some competitors can get a whopping 8 feet in the air.
Top competitors in the men’s sport include Uladzislau Hancharou from Belarus, Gao Lei from China and Dong Dong, also from China. In the women’s events, Canada’s Rosie Maclennan took the country’s only gold medal in London 2012, and remains a tough competitor along with Liu Lingling from China.
More information can be found at the Trampolining Olympic page.

4. Who holds the current world record in trampolining team jump?

The current world record for team jump, where team members bounce another jumper into the air, is held by three brothers from the USA. Sean, Eric and TJ Kennedy broke the world record on a rainy day in April 2014 at the Rockefeller Plaza in New York City.
To achieve the record breaking height of 6.7 meters, Sean bounced flat on his stomach, making it safer for his landings and providing better control while his brothers acted as propellers, bouncing him through the air by jumping hard and consistently in the one spot.

5. Who holds the trampolining record for continuous bouncing?

You have to head all the way back to 1986, where a team of six from Cleveland State University set the record with an insane 53 days of straight bouncing. The men were from Delta Epsilon fraternity, and upon completion of their feat received a call of congratulations from their fellow frat brother, Ronald Reagan.

There are a number of interesting world records for trampolining. Thanks to marvel of the internet, people around the world continue to push the boundaries on various trampolining records:

Below is a video of a trampoline team attempting to break the world record for the most people to forward flip off a trampoline onto a platform in one minute. Although we don’t recommend trying this one at home, it’s certainly a fun one to watch!

The Guinness World Records actually has almost 40 trampoline related records. You can find them all here. Take a look, maybe there’s one you might be able to break!

7. What sports use trampolining for their training?

Trampolines are used in a variety of sports. That’s because they’re great training tools that help promote balance, fitness and coordination. Here’s a list of just a few sports that use trampolines in their training programs:

Trampolining is great for cross-sport training and practicing safe acrobatics and landings. If you train in a particular sport or just want to improve your strength and flexibility, trampolines are much more fun than running up hills and lifting weights.

8. Where is the world’s largest trampoline?

To find the world’s largest trampoline you’ll need to travel all the way to Wales, and then underground! Opened in 2014, Bounce Below is part of Zip World, and outdoor recreation facility located in an old mine in the town of Blaenau Ffestiniog. Visitors can enjoy underground light shows, and traverse 60-foot slides all in an exciting underground environment.

9. How many calories can you burn on a trampoline?

As a low impact exercise, trampolining is ideal for burning off those extra calories. In fact, a 20-minute trampolining session can burn between 100-200 calories. So not only can you improve your balance and agility while having fun, you’re also getting in healthy exercise while you’re at it.

10. Why do astronauts use trampolines?

Trampolining is an essential part of NASA’s space training program for future astronauts. It’s believed to:

A study conducted in 1980 called Body Acceleration Distribution and O2 Uptake in Humans During Running and Jumping found that “The external work output at equivalent levels of oxygen uptake were significantly greater while trampolining than running.” Basically, training on a trampoline was better conditioning than running for astronauts.

Think your kid could be the next Neil Armstrong, or just want a fun, low impact way for your children to get fit? Check out Oz Trampolines exciting range and find the perfect trampoline for your kids today.

Learn more about trampoline fun with our guide to trampoline games and fitness.