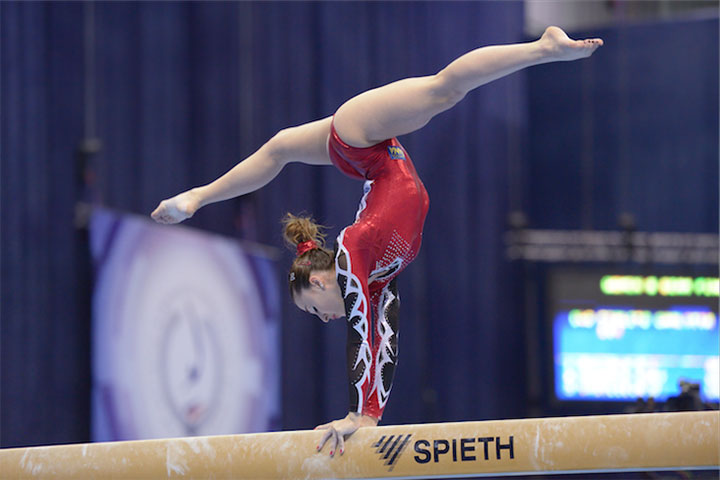 Australia has a history of producing some of the finest athletes in the world, not least of all, gymnasts. In fact, it took England 16 years until they were finally able to beat the Australian gymnast team in the Commonwealth Games this year.
Here, we’ve created a list of some of Australia’s biggest and brightest gymnastic stars.

Lauren Mitchell has been called Australia’s best gymnast more than once. Despite her young age of 22, Mitchell already has a long list of victories thus far in her career as a professional gymnast. Originally from Western Australia, Mitchell won a silver on floor and another silver alongside the Australian women’s artistic gymnastics team at the 2014 Glasgow Commonwealth Games.
In 2010, Lauren Mitchell made history by becoming the World Champion on floor at the World Championships event in Rotterdam.

Olivia Vivian is another Western Australian gymnast. In 2008, Vivian was part of the Australian Olympic team and had the highest score of her team on the Uneven Bars. Her team placed sixth in the 2012 Olympics. In the 2014 Commonwealth Games, Vivian contributed to her Australian women’s artistic gymnastics team’s score by competing in all four events. In the all-round final, she finished in fifth place.

Tsukahara started his career competing as an artistic gymnast for Japan, and in 2004 he won gold at the Olympics. He now competes and coaches for Australia. His father, Mitsuo Tsukahara, was a multiple gold medalist in the Olympics of the 1960s and 1970s.
In 2012, Tsukahara gained Australian citizenship so he was able to begin competing for Australia on the world stage. He is now part of the Australian men’s artistic gymnastics team.

Georgia-Rose Brown is an Australian artistic gymnast, training at the Victorian Women’s High Performance Centre. At 170 cm tall, she is one of the tallest gymnasts in the world. In May this year, Brown competed in the Australian National Championships, winning the gold medal with her team. She also played alongside the Australian women’s artistic gymnastics team at the Commonwealth Games in 2014, helping take out silver.
Brown ranked thirteenth in the all-round event, and in 2014 Brown also attended the World Championships with the Australian team, finishing in seventh place.

Mary-Anne Monckton currently trains at the Victorian Women’s High Performance Centre under Misha Barabach and Tracey Penaluna. Since 2006, Monckton has been a member of the National Team. In 2013, she won team gold and balance beam silver at the Australian Nationals. This year, she attended the Doha World Cup and won silver competing on bars. Monckton was part of the Australian team for the Glasgow Commonwealth Games.

Kiara Munteanu is an elite Australian gymnast currently training at the Victorian Women’s High Performance Centre under Mikhail Barabach and Tracey Penaluna. Born in 1997, Munteanu is one of Australia’s youngest elite gymnasts. In 2011, Munteanu made her international debut at the Vitaly Scherbo Invitational and won gold on vault and bars, and silver in the all-around and on floor exercise.
Earlier this year, Munteanu was chosen to represent Australia at the Nadia Comaneci Invitational and City of Jesolo Trophy. Munteanu won the team gold, and placed sixth in the all-around at the Nadia Comaneci Invitational. She also placed eighteenth in the all-round at the City of Jesolo Trophy, fourth on bars and eighth on floor with the Australian team.

Shaun Swadling entered the elite gymnastics scene at the 2011 World Championships. Just one year later, Swadling won gold in the synchronised gymnastics event along with partner Blake Gaudry at the 2012 Pacific Rim Championships. Swadling trains in Newcastle with his older brother Ty, under the direction of coach Brett Austine. This year, he won bronze at the 2014 FIG Minsk World Cup in the Synchronised Trampoline competition.
Swadling then went on to place seventh in the world in the Men’s Individual Trampoline Final at the 2014 World Championships hosted in Florida, USA.

Originally from Penrith in New South Wales, Michael Mercieca now trains in Brisbane at the Gymnastics Queensland High Performance Centre. Mercieca started out in gymnastics at the age of five, first representing Australia as a Junior in 2007. As a senior athlete, he has gone on to compete at the World University Games and Pacific Rim Championships. At this year’s Australian Gymnastics Championships, Mercieca won three silver medals and two bronze medals.
No doubt all of these athletes have had amazing careers so far. It’s exciting to see what they will achieve next for Australia.
Social: Wondering who Australia’s elite #gymnasts are? We’ve made a list of 10 Aussie gymnasts you need to watch